One of my most recent paintings; a proud vixen, was commissioned by Graham to commemorate his much-loved Aunt, who sadly passed away earlier in the year. I thought that it might be nice to share a little insight into the life of this magnificent woman, and why Graham chose a fox in particular to honour her.

Aunt Barbara resided in Black Horse Drove for most of her life; a little place nestled in the fens of Cambridgeshire, along with Uncle Fred. In addition to working on a farm he also had a small holding of his own, which he tended to when his work on the farm was done for the day.

They were your archetypical happy farming couple with Uncle Fred sporting large mutton chop sideburns his whole life and Aunty Barbara dressed exactly as you would expect a farmer’s wife to dress (think of a picture of a 2nd World War farmer’s wife and that was her.)

Sadly, they never had children of their own, but a large extended family meant they were blessed with plenty of surrogate children to which Aunt Barbara became a second mum.

A prolific knitter, Aunt Barbara created many stuffed animals, blankets and throws for each and every niece and nephew, as well as for all of their children too over the years. Her home was also filled with wonderful stuffed animals for each generation to enjoy when they came to visit. One can only imagine the miles of wool she went through!

Every Christmas it was a family joke that Aunt Barbara single-handedly kept the post office in business. She would send out over 200 cards each year, and every single child under 18 always was sent at least fiver too. Generous for any Aunt and Uncle, but when you remember Uncle Fred was a farm worker, you realise even more what a generous pair they were.

Nearby to Aunt Barbara’s home were dykes, put in place to help prevent flooding when it was wet, and provide irrigation in the summer. Graham fondly remembers attempting to jump these at every opportunity, and invariably ending up soaked when he didn’t make it across! Each time he trudged back to Aunt Barbara dripping wet, she would help him and his clothes get washed and dry before his parents found out! Even years later they like to laugh about their little secret and how she had always helped him out.

In much later life it was Graham’s time to help his aunt when she had problems with her knees. She sadly also then developed cancer. She called to let him know, but also that he was the last to know. A puzzled Graham asked why? She simply replied that he would try and persuade her to stay and get the best treatment, but at 90 she was ready to go.

In a tearful exchange of words, Graham was understandably saddened, but understood. Aunt Barbara had her faith, which provided her comfort, and knew that Uncle Fred, who had passed 7 years before, would be waiting for her.

Like a Vixen, that can’t quite seem to leave her grown up kits despite knowing she should, Aunt Barbara stayed for another 18 months; either the man upstairs wasn’t quite ready for her yet, or Uncle Fred wanted to make sure that their allotment was just right before she arrived.

Again, like a Vixen, Aunt Barbara was both fiercely protective but gentle, and a loving aunt to all of her ‘children’. She never spoke a harsh word, and just a smile could brighten your whole day, or wash away the fear when something had left you feeling scared.

Completely unexpectedly Graham received a lovely gift from his Aunt Barbara in her will. Not sure what to do with it, his wife suggested a painting might be a way to remember her, and they thought back to a fox they had seen on my website! We started talking, and I was honoured to be asked to paint something to celebrate such a wonderful woman, and certainly aware of the importance of getting this just right.

I sent an outline of a picture across to start with, but it wasn’t quite how Graham had envisaged, a little too much of a Reynard he commented. Thankfully though the finished piece, created from pictures of Aunt Barbara for reference, seems to have been well received. She now hangs proudly in the living room, attracting lots of comments, and recalling memories of Aunt Barbara, of which I am sure there are many!

Thank you so much to Graham for trusting me with this special painting, and for sharing wonderful stories of his much-loved and greatly missed Aunt Barbara, I have loved hearing all about her!

Such a brilliant likeness to the breed, colours are vivid and bright. Had such lovely comments about it. Delivery was within a few days and well packaged. Will be looking to buy more from Sarah Taylor in the future. 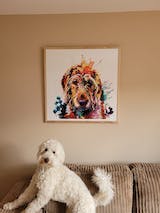 Beautiful print and quality frame. Unfortunately it's not in situ yet as I'm saving it for when I move into my new property, but I'm very much looking forwards to putting it up.

C
Percy The Squirrel Canvas C.J.
We love Percy, he makes us all smile!

Brilliant service and easy to hang. Perry is gorgeous, and sits on the wall peaking out at the birds, like he's poised ready for action. He brings a smile to our faces, thankyou.

We have loved her ever since we saw her on the wall at Another Place. Finally bought our house and sorted the dinning room out and she finishes it of excellently.

Thank you for Barnaby he has taken pride of place in our dining room. We absolutely love Barnaby and thank you for the efficient, quick service.